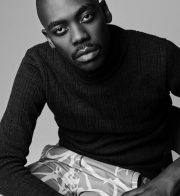 Leaders in the Science of Fashion (LISOF) graduate and Africa Fashion International Young Designer of the Year 2014 winner Rich Mnisi is a South African designer and founder of his own label of the same name (formerly known as OATH).

2014 marks his most significant year yet. Winning the AFI awards gave the young designer that final push and inspiration to launch his own brand OATH. Later that year he embarked on another milestone as he was selected for the Design Indaba Emerging Creatives Programme 2015.

His brand Rich Mnisi is only in his 4th year of existence, but has impacted the South African fashion landscape with his extremist yet minimalist structures that in no way sacrifices on design and craftsmanship. His creations defy traditionals distinctions between womens and menswear as he makes his own sense of race, sexuality and identity but always with a contemporary outlook, which is unique given his home country’s history with racism, discrimination, homophobia and xenophobia.

Many of the explorer’s work has been noticed by international media and appeared in the editorial pages of Vogue, ELLE, I-D Vice, Dazed and Confused, WGSN and more. His latest collection, NWA-MULAMULA: MOTHER ‘18 has been put on display as an installation at APPEAR by Fashion Africa Now in Hamburg, Germany.

Having a global view catered towards an aspirational market, Rich aims to unravel the stories that are deeply rooted within African heritage and the cultural realms of the modern world to tell the unique stories of the past, present and future.

“We are in a time where [the process of] exploring our identity, our heritage and our future are coming together to create a very important narrative”