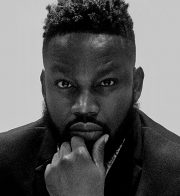 Kolade Adeyemo is the Co-founder & President of OXOSI, an e-commerce platform bringing the top of African luxury to an international market.

Born in Lagos, Kolade pursued an undergraduate degree at Binghamton University, receiving a Master’s Degree in Social Sciences in New York. He then decided to support other African youth adjusting to the diaspora by working in the non-profit sector with social activist Geoffrey Canada at the Harlem Children’s Zone. These experiences led him to commencing on a new journey partnering with fellow Nigerian creative Akin Adebowale. Together they founded BASE official, a creative agency providing premium commercial marketing and design solutions to an array of U.S corporations.

Along this journey, a momentous presence of a social and creative renaissance on the continent sparked a new idea at BASE official which led to establishing OXOSI in 2015. The  luxury e-commerce platform is inspired by Afromodernism. It’s the first global e-tailer  focusing on fashion from Africa or inspired by Africa through designers, while producing online content that challenges the perspective on African identities. The idea is to foster a new African design culture by also featuring new stories and works of captivating subcultures, movements and aesthetics. Besides being the co-founder of Oxosi, Kolade also holds a position as head of business development, retail operations and overall strategy for the company.

Kolade’s goal is to tell the good stories from the continent, supplying  a commercial African fashion platform while maintaining the depth and essence of a storytelling culture.

“It’s about who we are, and who we represent across the world”