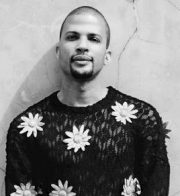 Dimeji Alara is a celebrity stylist, journalist and fashion editor.

Born in Paris he started his fashion adventure with Genevieve magazine Nigeria in 2004. This got followed by the launch of his own magazine Style Mania, which he left to work with Genevieve magazine again in 2013, taking a position as editor until 2015. In 2016 the stylist joined the American and South African co-production team of the Blue Mauritius film, assigned to bring in designers from Africa to give the film a more original feel and display iconic rising stars in fashion.

In 2017 he got appointed as Fashion editor at Elle Magazine South Africa and since then captured remarkable talents from the continent and beyond. He also contributes as a fashion director and stylist.